“When I got older, I learned that darkness is a place, and it’s full of monsters.”

So begins the melodramatic story of Shadow and Bone, a new Netflix Original series based on the book of the same name, written by Leigh Bardugo. The Shadow and Bone cinematic universe is placed in a world that is violently divided by racial and classist tensions, war, and most prevalently, an enormous, shadowy entity called The Fold. The Fold is a massive expanse of darkness, shadows, and storm clouds that acts as a wall, perhaps better described as an impenetrable, intangible barricade. Inside The Fold, terrifying flying monsters called volcra circle above, making safe passage nearly impossible.

In this fantasy world, called “The Grishaverse” by fans of the book series, there is a small population of humans that possess magical abilities, called Grisha. With powers that range from controlling wind and fire to manipulating people’s bodies, the Grisha’s abilities seem like a cross between the alchemy of Fullmetal Alchemist and the bending of The Last Airbender.

Enter Alina Starkov, the leading heroine of the series. Being half Ravkan and half Shu (basically the Grishaverse’s versions of Russia and Asia), she faces discrimination, both during her childhood in an orphanage and while she works as a simple cartographer for the Ravkan military. Her best friend is a boy named Mal, who grew up with her at the orphanage and also works for the First Army. Although Alina and Mal each lead a meager but simple life, their worlds are suddenly turned upside down when Alina discovers that she is Grisha, capable of an incredible and previously unseen power.

In the first episode, Alina is revealed to be a Sun Summoner, a rare Grisha who has the power to create and bend light at will. She rivals the Army’s Dark General, Aleksander Kirigan, who has the ability to create shadow and is also descended from the original creator of The Fold, a Shadow Summoner. Upon the discovery of Alina’s power, the two begin a manipulative back-and-forth between selfish motivations and the universal need to get rid of The Fold.

Additional main characters include the Crows, a trio of sneaky criminals that try to kidnap Alina for their own financial gain. Originating from the bustling, London-esque town of Ketterdam, each of the Crows have their own speciality: Kaz is a clever gangster and a mastermind at planning heists, Inej is an acrobatic knife expert and assassin, and Jesper is a witty sharpshooter who serves as the main comedic relief for the series.

Let’s start with the good parts of the show (unfortunately, there isn’t much). Since the fantasy genre has been done countless times, from Lord of the Rings to Harry Potter and everything in between, it feels like it’s difficult to come up with entirely new content these days. Despite this challenge, Shadow and Bone manages to be distinct with a few original concepts, although you can’t deny that it borrows from typical fantasy source material.

Most notably, the one thing that makes Shadow and Bone really stand out is the fact that the series has a biracial Asian lead, with Jessie Mei Li starring as Alina. With a majority of the fantasy genre dominated by white characters and the usage of primarily white actors, seeing a BIPOC lead is unusual—but a very welcome addition. The Shadow and Bone Wikipedia page states that “Alina was reimagined as half-Shu in the series”, indicating that her mixed-race identity does not exist in the books. I admire how the show’s creators took Alina’s character in a different creative direction, therefore adding some much needed diversity and representation.

Another significant part of the series that deserves recognition is Jesper’s character being gay. Since I’ve never read the books, I don’t know if this was another characteristic that was changed for the Netflix series, but I think it’s worth noting that the show includes a gay character without the usual fanfare of “Hey! We have an openly gay character! But here’s the disclaimer, they will not do or say anything to indicate that they are gay and they will only have two minutes of screen time” (I’m looking at you, Disney). While it may be just a small component of the entire show, these kinds of normalized portrayals of BIPOC and LGBTQ+ people is a great thing to see. 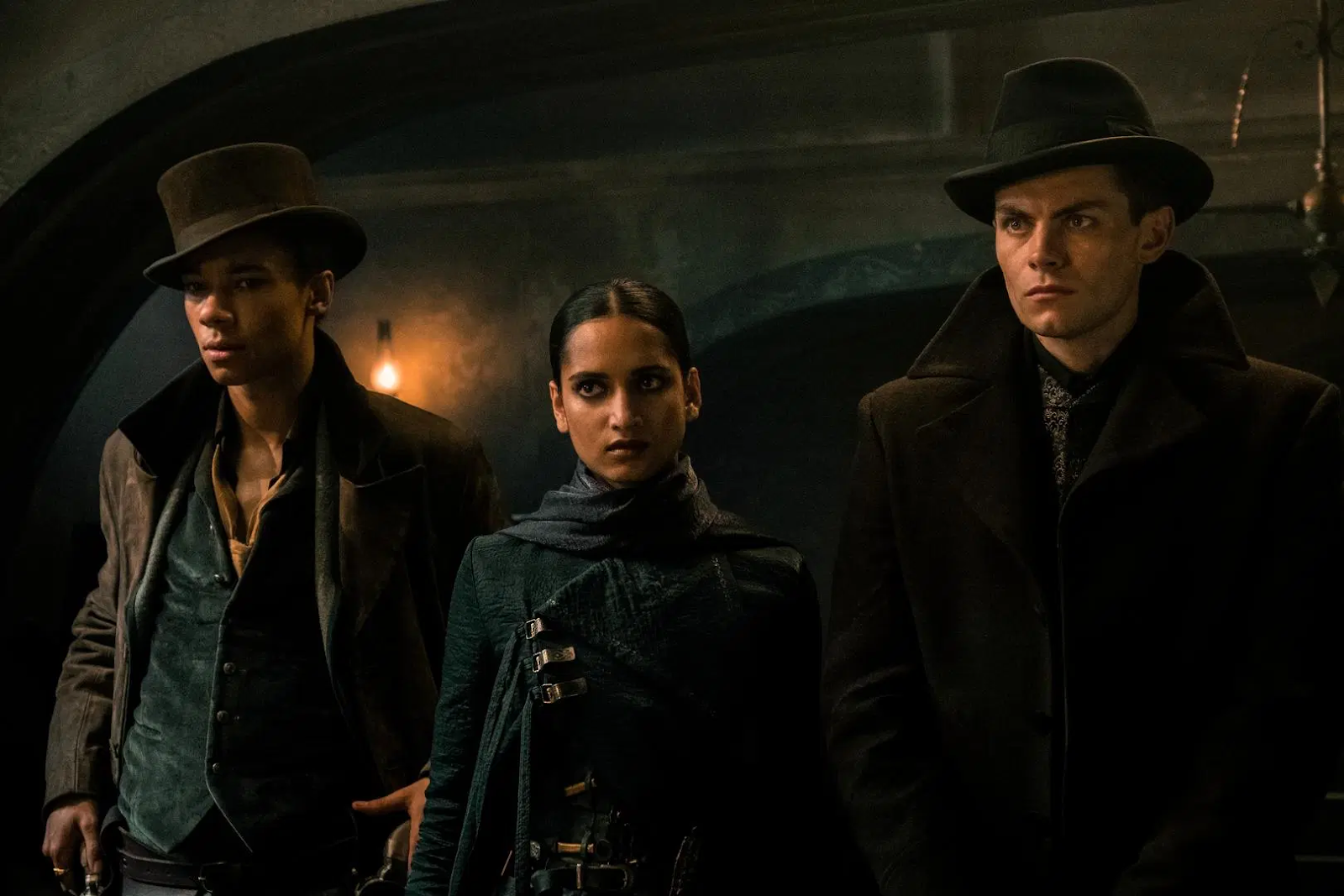 Nevertheless, now we need to get into the ugly portion of this review. While the overall plot of Shadow and Bone was pretty fast-paced and somewhat entertaining, ultimately what fell short for me was the complete lack of worldbuilding. There is no introduction, no map, no exposition or opening narration to explain to us non-book readers what the hell is going on. All we are told in the first episode is that The Fold is a giant wall of shadow, and people are at war. Which people, you ask? I couldn’t tell you.

The Shu Han are mentioned several times, and also are the source of the racial discrimination that Alina faces, but it’s never explained what role in history they played or why the Ravkans hate them so much. There’s also a lot of travelling done by the characters in the show, but the audience is never shown a map that properly clarifies the geography of this world. With The Fold being such a key influence on where people can and can’t travel, a map should’ve been included. If Shadow and Bone was going to borrow the bending from The Last Airbender, then it should’ve also borrowed a narrated exposition along the lines of “Long ago, the four nations lived together in harmony…”

Speaking of The Last Airbender, let’s discuss the CGI Grisha powers. There are a few fight scenes throughout the series that show Grisha soldiers knocking their opponents down with wind, striking people with fire, and manipulating enemies’ heartbeats to slow down or speed up. While the concept itself is interesting, this kind of magical ability is definitely hard to nail when showing it in a live-action format; we’re all aware of how silly and horrendous the bending looked in M. Night Shyamalan’s live-action adaptation of The Last Airbender. Although the Grisha’s CGI powers in Shadow and Bone are not nearly as bad, it still looks… kind of off. There’s a reason that bending-like powers look best in an animated format!!!

Honestly, I think I would’ve liked this show a lot better if I had read the books and actually knew the history and background of the Grishaverse. When establishing an entirely new fantasy world with different rules, you’ve gotta have a solid definition behind it—you can’t expect unfamiliar audiences to just understand it all after one episode. On the other hand, devoted fans of the books might really enjoy this show, since the cast has pretty good chemistry. However, I can’t say the plot was that great, especially when you consider how they built Alina up into a strong heroine, only for her to uncharacteristically act weak and helpless in the final episodes.

In conclusion, I have a lot of problems with this show. There’s a total lack of exposition, the action sequences aren’t that great, and the plot became less and less engaging as the series went on. Not even diverse representation can save a show from all of these flaws. Hopefully, the already confirmed second season will be a little bit better—but I can’t promise I’ll watch it.