When the official trailer for Disney’s Raya and the Last Dragon first dropped in late January of this year, not to be dramatic, but I can honestly say that my heart almost stopped. Since the release of Mulan in 1998, the collection of official Disney princesses has been sorely lacking another princess of Asian descent (and no, the horrible 2020 live action remake of Mulan does not count). When you look at the lineup of all of the iconic Disney princesses, it’s pretty obvious to anyone that diversity, or rather the lack thereof, is a glaring problem.

Out of the twelve “official” Disney princesses, only five of them—Jasmine, Pocahontas, Mulan, Tiana, and Moana—are BIPOC. Tiana, the only Black princess in the lineup, regrettably spends most of her screen time as a green frog, but that’s a conversation for another time. Although this statistic shows that almost half of the official princesses are women of color, when you factor in “unofficial” princesses like Megara from Hercules, Jane from Tarzan, and Anna and Elsa from the highly successful Frozen franchise (who also serve as the most significant characters on the “unofficial” list), it becomes clear that the majority of popular Disney princesses and characters are of Caucasian/European descent.

In addition, sometimes it feels like Disney is trying to gatekeep BIPOC princesses. Since they already have one movie with an Indigenous/Polynesian/Black/East Asian/etc. princess, why make another one? Would anyone care or notice if they made a second film with, say, a South Korean princess, or added another Indigenous princess (hopefully with a less problematic plot) into the mix? This seems to be the thought process for Disney execs thus far—one Disney princess for each BIPOC demographic is enough, but the number of white princesses is allowed to be infinite.

All of the above leads to my first point: the introduction of Raya, a South Asian princess, was surprising to say the least. After almost 23 years of Mulan being the only face of Asian representation at Disney, Raya was a refreshing (and overdue) addition to the Disney princess collection. The distinction between the East Asian Mulan and the South Asian Raya is key here; while East Asians, South Asians, and Pacific Islanders all get grouped into the same “AAPI” demographic, each region is completely distinct from the other. Within each region, there is a multitude of beautifully diverse people and cultures, and it feels disrespectful to blend them all together into one homogenous category.

It’s also important to note that South Asian people have been continuously marginalized by both East Asians and Westerners alike, particularly due to their darker skin tones and the rampant colorism that is integrated within it. According to this article by Kevin L. Nadal in the Asian American Policy Review, Brown Asians (a term that centers around Filipino people, South Asians, and Southeast Asians) are “excluded from the Asian American umbrella because of their cultural, religious, and racial/phenotypic differences.” Nadal also argues that because of this ostracism, the term “‘Asian’ usually refers to East Asians – resulting in feelings of marginalization and invisibility [for South Asians] within the Asian American umbrella.”

That’s why the introduction of a South Asian Disney character, with an appropriately darker skin tone, is so significant. Mulan only represents one country in the entire Asian diaspora, and there are still so many other opportunities to include diverse Asian characters and cultures in Disney films. So, when it comes to Raya and the Last Dragon, did Disney do a thorough job of appropriately representing South Asian people and their culture? 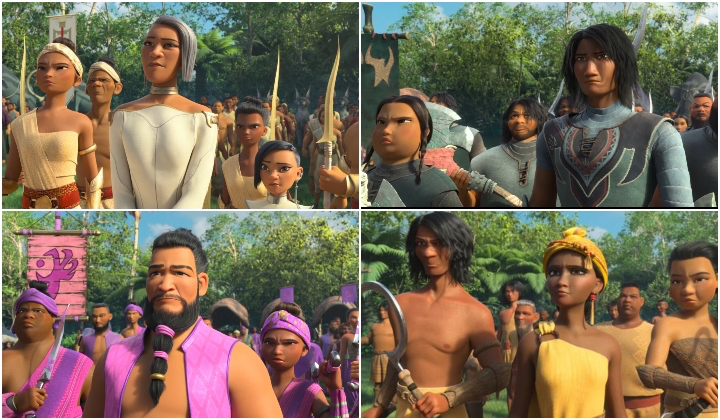 Well, sort of. The film’s premise states that the prosperous land of Kumandra, where the story takes place, used to be ravaged by Druun, menacing black-and-purple shadow monsters that turn people into stone (which was, to be completely honest, kind of a lame villain figure). The dragons of Kumandra, who all possess their own unique magical abilities, came together to banish the Druun and revive the Kumandran people, although the dragons were all eradicated as a result. The Dragon Gem remained after the disappearance of the dragons, but the people of Kumandra fought over who would get to keep the gem. They are divided into five tribes: Fang, Heart, Spine, Talon, and Tail.

As you can see in the picture above, the people of each tribe are designed to be distinct from each other. There are varying shades of darker skin tones, different facial features, and different styles of clothes and hair. When Raya travels throughout the five regions in the film, the landscapes and cities also vary greatly from each other. This is a holistic portrayal of how South Asian countries and people are unique and diverge from each other in real life, and should not be grouped together into one interchangeable likeness.

However, while there was great diversity shown on screen, there wasn’t a whole lot going on behind the scenes. Kelly Marie Tran, a Vietnamese-American actress, voices the titular heroine Raya, but she is the only main cast member of South Asian descent. While Awkwafina, Gemma Chan, Daniel Dae Kim, and Sandra Oh (who voiced Sisu the dragon, Namaari, Chief Benja, and Virana, respectively) all did an incredible job voice acting for the film, they are all of East Asian descent. Some might argue that “at least they didn’t use white actors” is sufficient, and that we should be “grateful” that the filmmakers hired a majority of Asian actors for the cast in the first place.

Here’s the problem with that argument: at this point, there’s really no reason to deny giving the roles of South Asian characters to, well, South Asian actors. While the East Asian actors mentioned above have all attained respect and glowing reputations in the film industry, experience should not take precedence over giving roles to the corresponding demographic of people that are being represented in a film. Moana is one of the best examples of this: Auli’i Cravalho, an actress of Native Hawaiian descent, had never acted in a film or TV series before she was given the role of Moana, a Polynesian princess. Despite it being her first time voice acting, Cravalho absolutely killed it, showing that just because you’re a newcomer to the film industry doesn’t mean you can’t succeed.

Given Disney’s big fat wallet and global reach, it should have been easy for them to find South Asian voice actors, experienced or not. Who knows, if they had made more of an effort to cast South Asian actors to play the characters in Raya, they could have discovered more breakout stars like Cravalho. Similar to the discussion in the aforementioned article by Nadal, excluding South Asian people by casting East Asians to play them in films only furthers the divide between them. The Raya Honest Trailer (sarcastically) says it best: “Journey to Kumandra, a melting pot of Southeast Asian cultures… and East Asian voice actors.”

As for the film’s characters’ designs, I have a lot of mixed feelings about it. Let’s start off with the positives: anyone would agree that the titular heroine Raya is one of the most badass female characters in the Disney cinematic universe. She’s willful, independent, good at martial arts, and knows her way around a sword. On top of the (appreciated) lack of a male love interest, Raya would rather engage in a sparring match than burst into song. As far as the actual visual design of her character goes, I’m just grateful that the animators didn’t give her unnaturally massive eyes that take up the entirety of her face (see: Elsa from Frozen and Rapunzel from Tangled). The anatomy of her design makes her look like an actual normal human being, which is a welcome sight after more recent Disney princess films.

Namaari, the daughter of the chief of Fang, serves as Raya’s rival and an anti-hero of sorts. Completed by a friends-to-enemies (to lovers?) plotline, she has the biggest character growth in the film. Namaari has dope fighting skills, dope hair, dope everything. As my friend pointed out recently while watching the film, “this is PEAK character design.” 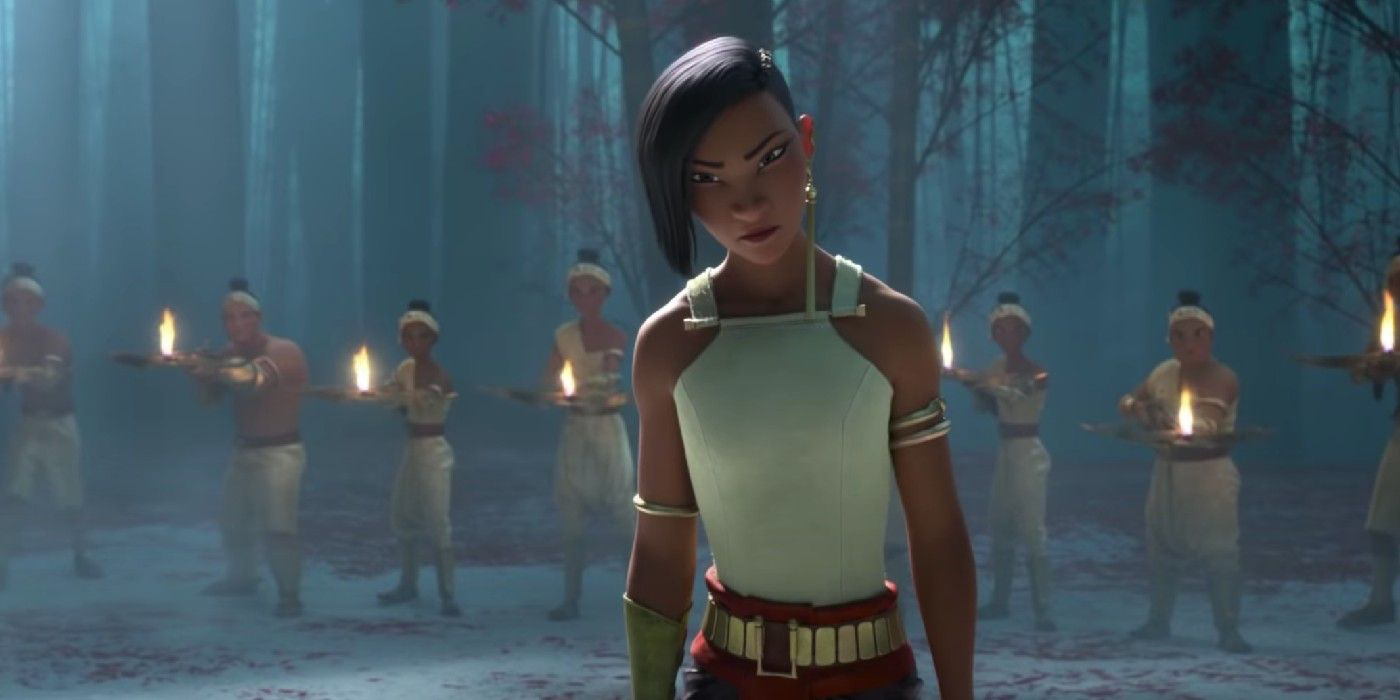 While Raya and Namaari are both impressive characters, both in terms of personality and visuals, there was one main character that had a massively disappointing design: Sisu, the titular “last dragon”, who is brought to life through Awkwafina’s signature raspy voice. Simply put, the way Sisu’s character looked never sat quite right with me… and there are a lot of people out there who would agree. While Western audiences might be more familiar with the style of European-influenced dragons, like those shown in Game of Thrones, Asian portrayals of dragons are quite different. They usually have long and slender snake-like bodies, with smaller legs and no wings (but they can still fly!). They’re typically covered in scales as well, with whiskers and conical horns to complete the look.

Sisu’s look was allegedly inspired by the Nāga, which are dragon-like creatures that come from South Asian mythology and are often associated with the powers of water. While Sisu’s design received a lot of praise from film critics, South Asian people had different opinions to voice on Twitter. Some of the best criticisms I’ve seen so far are how Sisu is just Princess Elsa’s face lazily copied and pasted onto a dragon’s body, how she looks like a blue Worm on a String with a weird unicorn horn, and as Honest Trailers puts it, “an orphaned cross between a Thai Nāga and a stretched out My Little Pony.”

All of the above indicate that although the animators put in a lot of effort to make Sisu look good, her weirdly fluffy/furry body and strangely Elsa-like facial features undermined their work. There’s no denying that the animation is gorgeous for all aspects of the film, but Sisu’s design just wasn’t satisfactory, especially to South Asian people who are familiar with Nāga folklore and imagery.

Consider the following incredible redesign from Twitter user @frouzon: even just small changes, like elongating Sisu’s snout, modifying her teeth, and adding whiskers, makes a huge difference in making her look more dragon-like (and an appropriately Asian-inspired design at that). Although the redesign may not be as drastic as, for example, the one that was done for the Sonic live action movie, the details still matter. With this in mind, another popular joke/criticism for Sisu was “how did they manage to gentrify a dragon?”

To conclude, while Raya and the Last Dragon created major waves in adding diversity to the Disney princess lineup, there was still a lot of room for improvement when it came to proper representation behind the scenes, and for culturally appropriate character designs. Even the plot itself felt somewhat mediocre for Disney standards, despite having many incredible characters involved. After drawing inspiration from multiple South Asian countries to create Raya, there is speculation that Disney will not be adding another South Asian story to their repertoire anytime soon—here’s to hoping that they’re wrong, so if Disney does decide to attempt another dragon character, they’ll do it right next time.