Leo Carax’s Annette is something of a surreal opera, and not just because Marion Cotillard plays an opera singer. Sound, including sung dialogue, is the most important element in this surprising, experimental, but not impenetrable film about performance, death, and love.

As the opening credits roll, the audience is asked for complete silence, instructed to not even breathe. Red sound bars flash across a shot of a dark city street in time with sounds of static. Then, the scene shifts to a Santa Monica recording studio from which the first number, “May We Start” is launched by Carax himself, appearing behind the soundboard with his real-life teenage daughter, Nastya Golubeva Carax. The song serves as a prologue, featuring the principal cast members and many of the musicians that appear later in the film. Leaving the recording studio, they parade down the street. The musicians are in the same costumes as their later appearances, but the principal cast members appear in street clothes, and adopt elements of their characters’ costumes toward the end of the number, smoothly becoming their characters on screen.

This quick meta-cinematic moment calls attention to the unreality of performance, one of Annette’s key themes, and it simultaneously establishes the reality of the world of the film. Additionally, the opening number musically sets the tone for the next 2 hours and 15 minutes of the movie, which is scored by Sparks, an American pop duo composed of brothers Ron and Russell Mael.

At the end of the song the characters head off in different directions, Henry McHenry (Adam Driver) to his sold-out stand-up show “The Ape of God” at the Orpheum Theater, and Ann Defrasnoux (Cotillard) to appear in a fictional opera called “The Forest” at Frank Gehry’s Walt Disney Concert Hall.

McHenry’s brand of stand-up is known for being provocative. Onstage, he oscillates between dry, grim statements and high-energy mic twirling in a call-and-response with the audience, supported by a quartet of female singers. His show is part male vanity and rage, part self depreciation, but unlikely to make anyone laugh. Rather, his audience laughs and claps when he tells them to, demonstrating the power he wields over them through his charisma.

At the beginning of the film Henry and Ann are engaged, a fact that surprises Henry’s audience members when he announces it onstage. The audience agrees with his acceptance that Ann is “too perfect” for him. The couple’s relationship dynamic is described through the metaphor of a queen and a clown. They might be mismatched, but they are in love, as is proclaimed in the duet they repeat, “We Love Each Other So Much.” Even as the clown, however, there’s a certain darkness about Henry, matched by an ethereal quality in Ann. When his show goes well, Henry says he killed his audience, when Ann’s goes well, she says that she saved hers.

The couple marries, has a child and is the subject of celebrity gossip. Marriage and family life aren’t McHenry’s strong suit however, and he reacts by going ever darker in his act, joking about killing his wife. He loses the support of his audience and tanks his career while Ann’s flourishes, his jealousy and out-of-control behaviour escalating to a drunken incident in which Ann is killed. Her watery ghost is just one of the surreal elements that contribute to the film’s dream-like quality.

Although McHenry is the protagonist, it’s hard to know what is going on in his head throughout the film except through his vague allusions to “the abyss,” and his pronouncements that it’s dangerous for him to look into it. Perhaps, like Anna Karinina, he’s drawn to self destruction, although it isn’t his own death he causes but that of those he envies. After Ann’s death he discovers that their child, baby Annette, is a singing prodigy. Roping in his “conductor friend,” Ann’s former accompanist (Simon Helberg), McHenry embarks on a world tour to showcase Annette’s abilities and generate some cash flow.

Throughout the tour, the film explores the exploitative nature of child performance, and whether or not McHenry is capable of being a good father. From birth until the final moments of the film, baby Annette is portrayed by a puppet. It’s a theatrical, perhaps Brechtian choice, as well as a metaphorical one. McHenry uses his child to get back into the public’s good graces. The puppet is unreal but not creepy. It is intriguing to look at, but it isn’t as easy to develop an emotional attachment to this puppet girl as it is to less humanoid puppet characters, such as Joey the horse in “War Horse.” The fact that she is a prop creates some distance between the character and the viewer, which pays off when she becomes real at the end of the film. 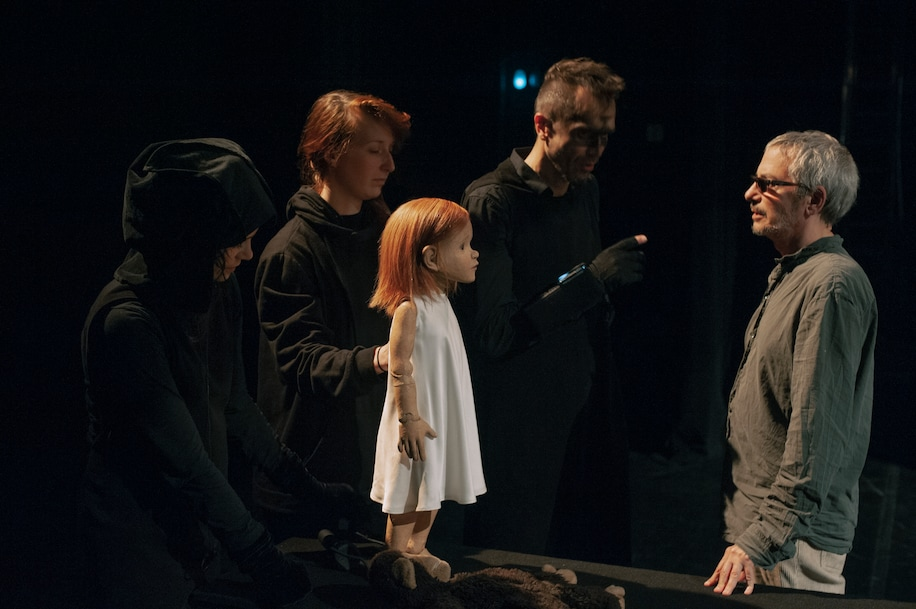 Helberg gives a compelling performance as a foil to Driver’s McHenry, looking after Annette for emotional reasons of his own. The conflict between the two boils over into violence, and McHenry’s violence seems to be a cycle only Annette can stop.

The film’s ending is tragic, as befits its operatic, melodramatic plot, but it doesn’t exonerate its anti-hero. It isn’t trite either. Leaving an opening for hope, it is simple while continuing to embrace the magical realism of the rest of the film.

Despite its strangeness, Annette’s originality makes it worth a watch, preferably in a theater if possible, where viewers can be part of an audience like the ones that interact with McHenry within the film, experience the opening message to the audience within the cinema context and enjoy the film’s ethereal musicality.