Ever since Netflix announced its plans to make their own live action adaptation of the ever-popular Avatar: The Last Airbender series, the ATLA fandom has been in a state of constant frenzy. Fans excitedly uploaded cosplay social media accounts, posted audition tapes, and scrolled the Internet regularly for any kind of update on production news. While we were hopeful at first that a Season 1 release (or a trailer, at the very least) would arrive in late 2020, the COVID-19 pandemic brought all production plans to a complete halt for everyone involved in the film and TV industry.

Almost three years have passed since the original announcement back in 2018, and we’ve finally received a major update: the cast list for the four main characters of the ATLA Cinematic Universe. The official Netflix account tweeted a photo of the four actors on August 12, 2021 with the caption “Meet the cast of our Avatar: The Last Airbender live-action series!” The ATLA fandom immediately blew up following the announcement, with mixed feelings and debates about the cast circling around on social media. 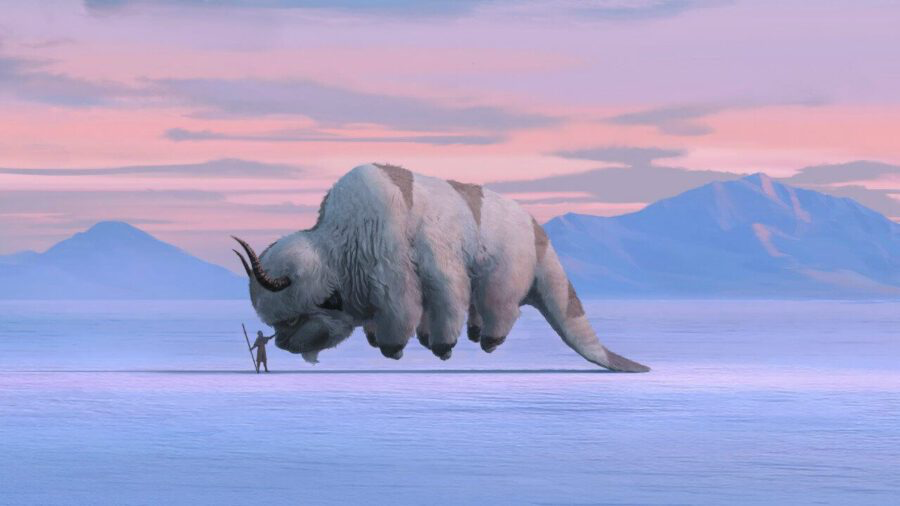 First things first: let’s thank our lucky stars that the four actors are of appropriate ethnic descent, that of which reflects the ethnicity of the source material’s animated characters. This casting decision is obviously in stark contrast to the whitewashed nonsense shown in the M. Night Shyamalan film adaptation, Which-Must-Not-Be-Named (I like to pretend it doesn’t exist).

In the original animated show, the main characters and the various nations of the ATLA world clearly draw inspiration from real-life cultures. The Air Nomads are based on Tibetan Buddhist monks, and the current Dalai Lama, Tenzin Gyatso, provided the names for two primary characters in both The Last Airbender and The Legend of Korra (aka LoK), ATLA’s sequel series. The Water Tribe is inspired by the Indigenous Inuit tribe, which is located primarily in Arctic regions such as Alaska, Canada, and Greenland. The Earth Kingdom is generally based on China, and the Fire Nation draws a lot of inspiration from Japan, particularly during its violent imperial phase pre-World War II. Throughout the course of the animated series, there is great diversity shown in skin tone, clothing and hairstyles, architecture, landscapes, and much more. The series has often been praised for including such diverse portrayals of Asian and Inuit people and cultures. 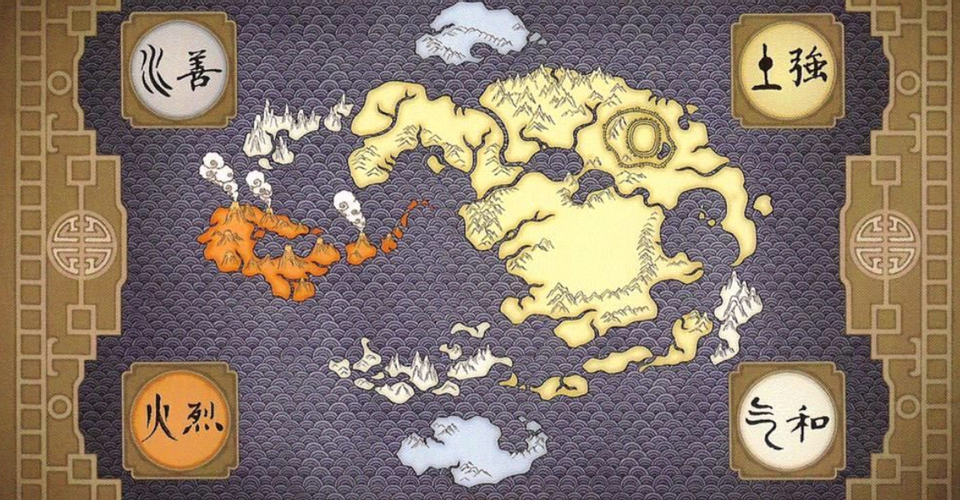 Unfortunately, this representation was completely thrown away when Shyamalan took the reins for his live action film. Protagonists Aang, Katara, and Sokka were played by white actors, even though white people don’t even exist in the ATLA universe. Strangely enough, primary antagonist Prince Zuko (played by Dev Patel in Shyamalan’s film) and a handful of Fire Nation characters were portrayed by actors of Indian descent, with most of them being dark skinned as well. Based on this info, I’ll let you draw your own conclusions about colorism and the symbolism behind non-white actors only being cast in villainous roles. Although a few Asian background actors were utilized in scenes that took place in the Earth Kingdom, the blatant whitewashing of the main characters was, frankly, disgusting.

Shyamalan’s film has continuously received harsh criticism over the years, and for good reason. Even if you put the whitewashing problem aside, the writing, acting, special effects, CGI, and basically everything else was absolute unwatchable garbage (the film’s 5% Tomatometer score reflects that). With whitewashing at the forefront of the disapproval of the film adaptation, I’m sure it didn’t take a genius to suggest that Netflix properly cast actors of Asian and Inuit descent for the newly planned live action series.

So, here’s where the new actors come in. Like I mentioned before, I think the entire fandom collectively breathed a sigh of relief when we saw from the photos that the new cast isn’t composed of solely white people again. However, that doesn’t mean that the casting is without fault; many people have already taken issue with the new cast, particularly regarding the actors who were chosen to portray Katara and Sokka. The two siblings are members of the Inuit-inspired Water Tribe, and in the animated series members of the Water Tribe are generally shown with darker skin tones than people from the other three nations. 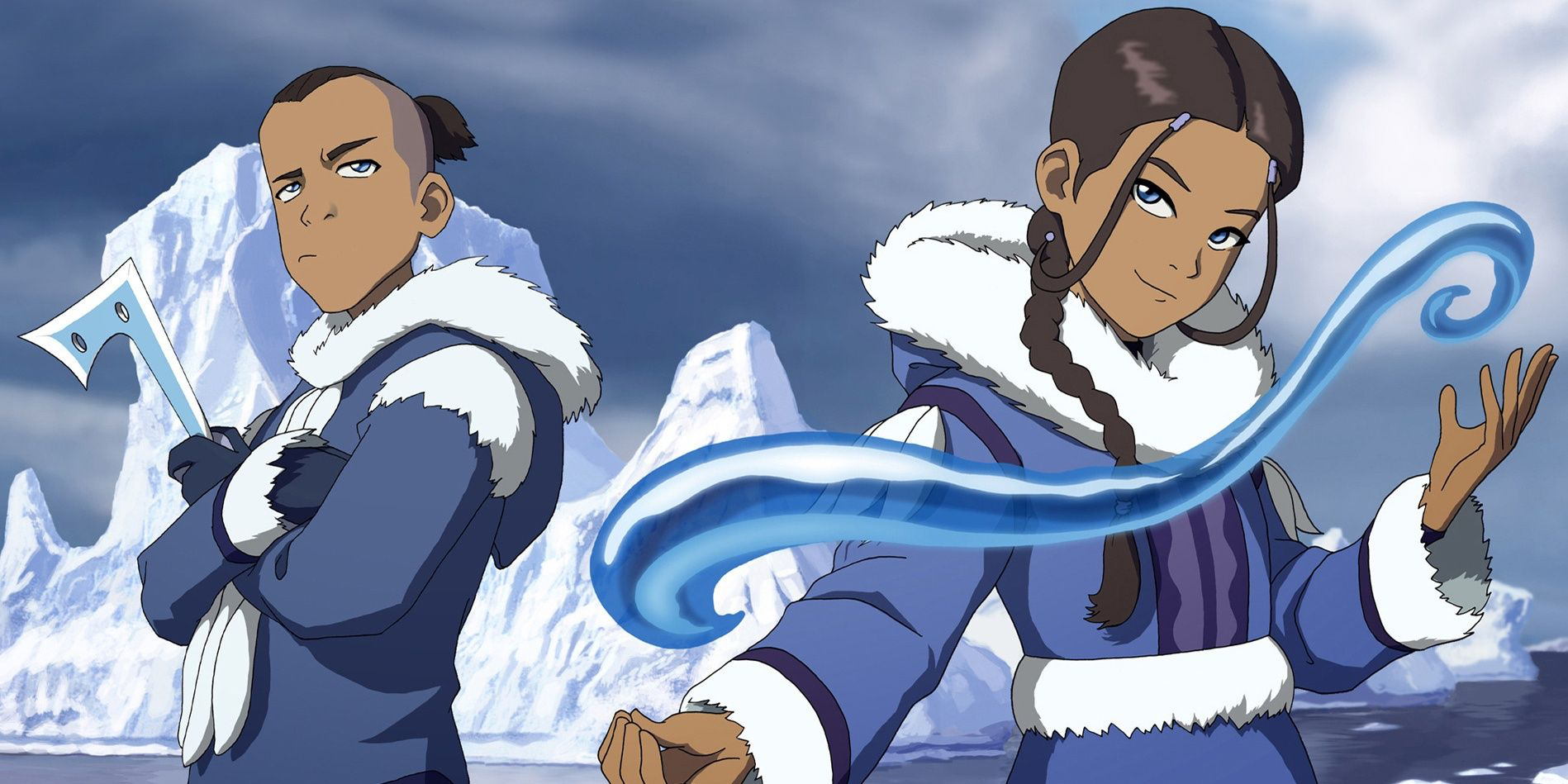 Actress Kiawentiio, who is set to play iconic water bender and heroine Katara, is of Indigenous descent, specifically from the Mohawk Nation of Ontario, Canada. Ian Ousley, who has Cherokee heritage, is set to star opposite Kiawentiio as her goofy and immature nonbender older brother, Sokka. Although the pair both have Indigenous roots, many fans have argued that this isn’t good enough—and that Netflix should have cast actors who are specifically of Inuit descent, not just from any Indigenous group. People have also pointed out how in the photos posted by Netflix (shown above), both actors appear to have much lighter skin tones than the animated Katara and Sokka, and that Ousley in particular has more pronounced Caucasian facial features.

If there’s one thing that a fandom is good at, it’s arguing. To counter the criticisms mentioned above, fans have also come forward to give various reasons for why this casting is actually perfect. According to this image posted to the Last Airbender Reddit page, Kiawentiio “is washed out [in the photo] due to her lighting… she looks darker in real life.” While this claim doesn’t magically solve concerns surrounding colorism, it’s worth noting that lighting does have a pretty significant effect on how dark or light skin can look in a photo. After all, Netflix has only posted that one image of the cast. I’m willing to give them the benefit of the doubt on this one, but we’ll have to wait for production sneak peeks and stills to really get an idea of how Katara will look in the show.

As for the Indigenous representation argument, I’m hesitant to pick a side on this debate. While hiring Indigenous actors is obviously a huge step up from Shyamalan’s untalented whitewashed picks, I’m also aware that when it comes to properly representing a marginalized or BIPOC group, we can’t keep accepting crumbs. Although the Reddit image mentioned above says “both Katara and Sokka’s actors are Indigenous Native Americans, one of several cultural groups that inspired the Water Tribes”, there’s no denying that the arctic location of the Water Tribes, as well as their clothes, tools/weapons, and even Katara’s iconic hair loopies are clearly inspired by the Inuit tribe specifically. Each of the Four Nations in ATLA draws inspiration from a blend of Asian and Indigenous cultures, but there are still clear ties to specific groups nonetheless. With all that in mind, I have to say I feel a little iffy about Netflix not giving the opportunity of the two roles to any Inuit actors, but I’m still happy for Kiawentiio and Ousley and excited to see what they bring to the series.

Moving on to a different aspect of the actors, fans have also already complained about the difference in age between Kiawentiio and Gordon Cormier, the young actor chosen to play Aang. Cormier and Kiawentiio are currently 11 and 15 years old, respectively—but don’t take my word for it, since this information varies depending on what source you’re looking at. In the original animated series, Aang is 12 years old (or 112, if you count his time in the iceberg) and Katara is 14. I don’t know what people are so upset about, but the casting feels pretty accurate to me. However, points have been made about how Cormier looks way younger than Kiawentiio, which could make things really awkward since the two are supposed to fall in love over the course of the series.

However, people forget that kids age fast. Like, really fast. One good example of this is Freya Allan, who plays princess Cirilla in Netflix’s Witcher series. While she looked around 13 or 14 years old in Season 1, the Ciri shown in the recently dropped Season 2 trailer looks like a completely different, much older person. According to this ScreenRant article, “the first season of The Witcher started filming right after Allan turned 17, but production on Season 2 lasted until she was nearly 20. This extended gap in time during a time when Allan is exiting adolescence and maturing explains why Ciri looks so different in The Witcher Season 2.” Another classic example of kids aging too fast for their TV show is Malcolm David Kelley, whose character Walt on Lost was written off the show because the actor went through a dramatic growth spurt.

My point is, although Cormier may look really young now, he will grow up over the course of filming and production. Assuming Book 1~3 of the original ATLA series will be similarly remade into three corresponding seasons, the entire course of the series will surely take years (especially since CGI doesn’t get done in a day). Also, it’s worth mentioning that the photo of Cormier posted by Netflix is at least 1 or 2 years old, so it doesn’t reflect what he looks like in the present. And who cares if he’s really young? The animated Aang is a goofy, silly kid anway, although he does have the fate of the world resting on his shoulders—being the Avatar is a tough job for a 12 year old. Besides, any real romance between Aang and Katara doesn’t take place until Book 2, and that’s a long way away (hopefully the series doesn’t get cancelled like Shyamalan’s planned film sequels did).

So far, it seems like the only actor that no one has taken issue with (yet) is Dallas Liu as Zuko, the banished prince of the Fire Nation. Liu also happens to be the only actor on the list that I’ve seen in a show before; he plays Shuji Ishii-Peters on Hulu’s PEN15, and is also supposed to make an appearance in the upcoming Marvel film Shang-Chi and the Legend of the Ten Rings. The other three cast members do have significant acting experience, but Liu may be the most recognizable out of the group. 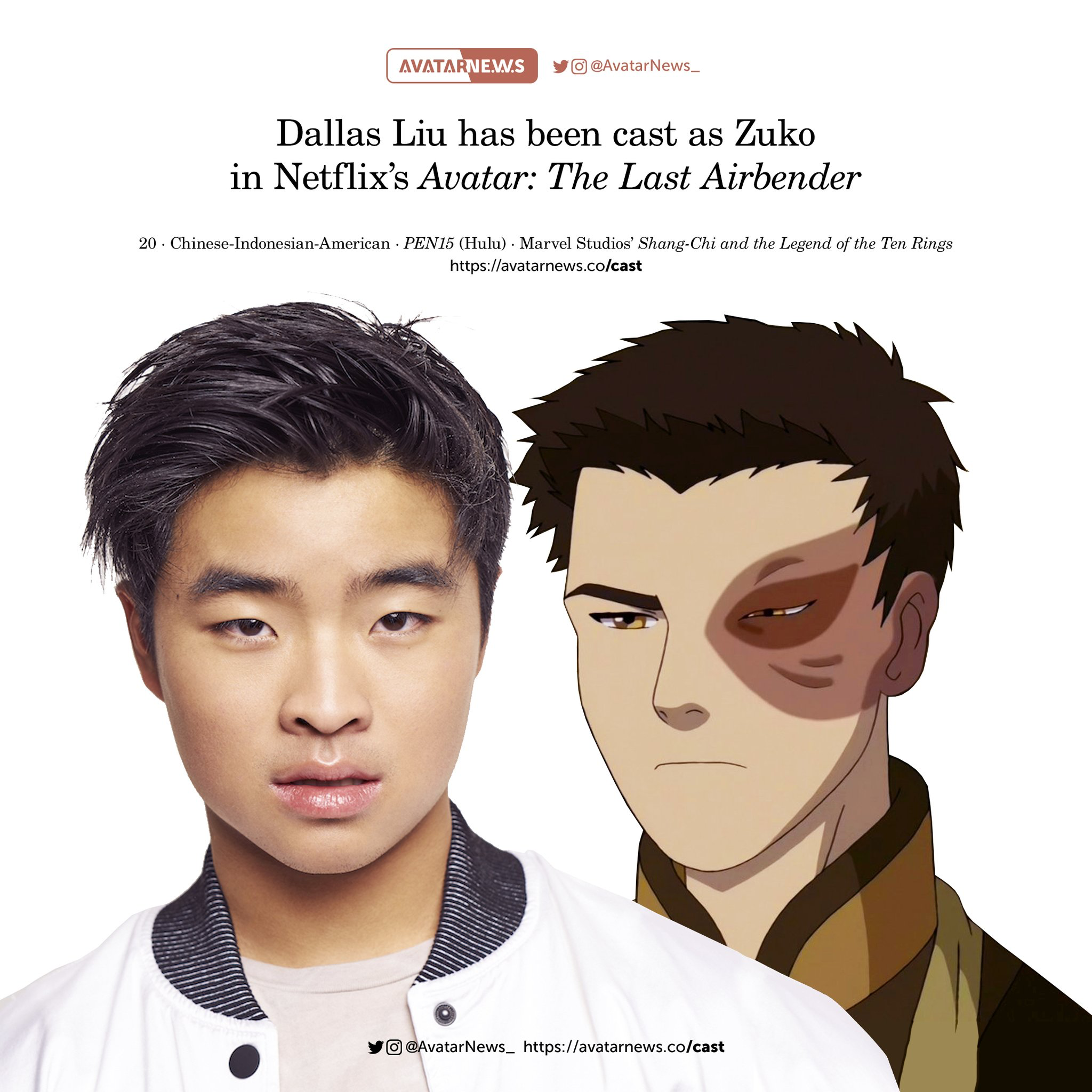 Based on his age, appearance, acting talent, and martial arts experience, I have really high hopes for Liu’s portrayal of Zuko. Zuko is definitely one of the most complex characters on ATLA—although he is an antagonist for most of the series, he has deep emotional complexity and a turmoil-filled personal history that adds several layers to his character. He also has one of the greatest character arcs in TV and film history; his internal conflict, his loyalties, and his personal beliefs shift frequently throughout the series, creating a truly well-thought out character and story arc for him. This might be one of the most difficult roles to bring to life in the live action series, so I hope Liu can deliver.

For now, I can say I’m pretty happy with this cast list. The faces of all four actors honestly look pretty damn similar to those of the animated characters, and I trust that the corresponding ages of the actors to the original characters will lead to better believability and authenticity in their portrayals. At this point, it’s still too early to tell what kind of performance these four actors will bring to the table. We have yet to hear any kind of news on actual production, not to mention that the cast for other key Season 1 characters like Uncle Iroh, Azula, Suki, Princess Yue, and more has not been announced yet. Meaningless fandom arguments aside, all we can do now is patiently await further news from Netflix. Oh, and maybe rewatch the ATLA series for the fifth time.