From Witcher showrunner Lauren Schmidt Hissrich comes the latest addition to the Netflix Witcher franchise, a brand new film titled Nightmare of the Wolf… and guess what, it’s animated!! With a lengthy gap existing between the releases of the first and second season of The Witcher, the Netflix live action adaptation of the novels by Andrzej Sapkowski, fans everywhere were surely eager for more Witcher content. After a lot of hype and extensive marketing, Nightmare of the Wolf is finally here—let’s see how it compares with the live action series. A quick disclaimer: I have not read the Witcher novels nor played the video games, so all of my Witcher knowledge thus far comes from watching Season 1 of the Netflix series.

Nightmare of the Wolf follows protagonist Vesemir, a legendary witcher who will go on to become Geralt of Rivia’s mentor. He appears in a very brief cameo in the live action series, but we don’t have much background information about him otherwise. The NotW film fleshes out Vesemir as a person, from his childhood origins and witcher transformation to his monster hunting adventures and epic battle against Tetra, a sorceress serving the Kaedwen Court. The film covers a lot of ground, despite having a short runtime of only 1 hour and 23 minutes.

The film wastes no time jumping right into the gory action in the opening scene. A noble family travelling through a forest at night is brutally attacked by a leshen, a terrifying shape-shifting monster that quickly massacres them. Right when the last surviving child is about to meet his maker, Vesemir steps in to save him. The slaying of the leshen and its subsequent usage of Old Speech (something related to ancient elven magic, I think) kicks off the rest of the plot, leading to surprising discoveries and battles among witchers, mages, and monsters alike.

Vesemir’s introduction is quick and impressionable: he’s immediately established as being a witty and sarcastic guy, but he’s also a good fighter and knows what he’s doing. He doesn’t seem to care about much besides killing monsters and getting paid, which is perhaps the ideal personality for a witcher. He’s arrogant but charming, and he isn’t afraid to get involved when a mysterious threat arises, one that is later revealed to be a powerful mutated elf girl named Kitsu. Oh, and I feel obligated to mention that bathtub scene—yet another parallel between Vesemir and live action Geralt. 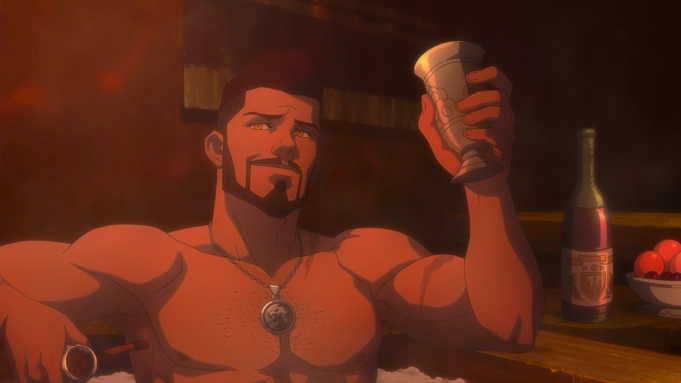 I quite liked Vesemir’s character overall, although his character development toward the end was a little questionable. I don’t want to spoil too much, but when his morals do a full 180° turn before the big battle at the finale, it seemed a little out of character for him. His character is set up to be a relatively careless and selfish person, from his childhood flashbacks to the way “present day Vesemir” carries himself. I won’t reveal the big twist at the end (it was a little cliche, honestly), but when Vesemir makes a horrifying discovery about the activities going on at Kaer Morhen, the training camp and “home” of all witchers, he magically turns into a good, moral person and fights for “the right thing.”

Although the childhood background and upbringing of Vesemir was beneficial to establishing him as a protagonist, the ending of the film was a little unfulfilling. The same goes for the sorceress Tetra Gilcrest, another protagonist who starts off working with Vesemir but becomes his enemy later on in the film. She is wary of witchers from the start, which seems to be a common theme of conflict throughout the entire Witcher franchise. Tetra’s character introduction is quick and not as fleshed out as Vesemir’s, forcing her to be more of a one-dimensional and rather uninteresting character.

Although the two engage in battle together against Kitsu when they first encounter the mutated elf, their brief friendship and cooperation is immediately cut off when Tetra turns on Vesemir. This jump into the big final battle felt too rushed, and the buildup to it wasn’t developed enough. At least there is one positive: Tetra and Vesemir had good banter going on, and unlike Geralt and Yennefer, there wasn’t a forced “will they, won’t they” subplot. Vesemir and Tetra had much better chemistry in my opinion, although nothing romantic between them is ever implied throughout the film.

On that note, let’s talk about animation. I actually really enjoyed the style that NotW utilized, because it felt much more like an actual “anime” than other Netflix Original Anime titles (such as Blood of Zeus and Seis Manos, which are more of an American cartoon style than a Japanese-influenced anime). From slashing down monsters with swords to giant magical portals opening up, the animated action in NotW is excellently drawn and, most importantly, looks believable. I also really liked the characters’ design, from their facial features to their respective outfits and mannerisms. While Henry Cavill embodies the character of Geralt really well, NotW in its animated form doesn’t have the same costuming and budget issues that The Witcher does (search “Nilfgaard armor” and you’ll see what I mean).

Additionally, it’s worth mentioning that animation is, in my opinion, the superior format for any kind of storytelling, but it works better for the fantasy/magic genre specifically. As my fellow writer Holly Ross states in her article “Why We Should Animate Our Fantasies”, “[animation] provides the perfect gateway to avoid the visual limitations that come with live-action adaptations.” When it comes to manipulating the elements through magic, fighting a giant fire-breathing dragon, or any other fantasy action item, CGI just isn’t cutting it—no matter how advanced it may be. It’s hard to make magic look good on screen when “viewers can tell when something has been computer generated… it takes away from an otherwise immersive experience” (Ross). 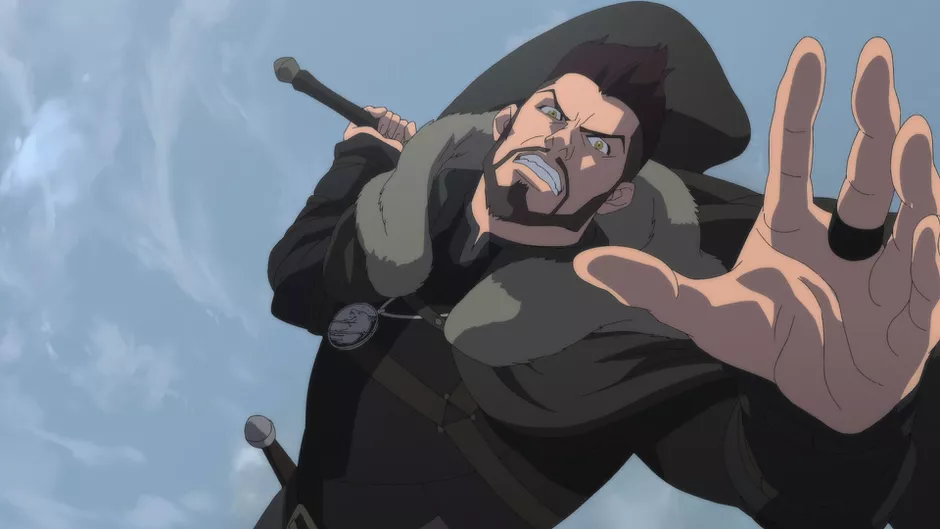 In this sense, Nightmare of the Wolf brings something to the table that The Witcher often fails to: believability. With its plethora of scary monsters and sometimes even scarier people, NotW uses its animated format to its full advantage by crafting a beautifully drawn fantasy world. There are scary creatures lurking in the shadows, magic can be used for both incredible and terrible things, and basic humanity comes second in the midst of epic battles. Animation is able to bring the incredible world of the Witcher source material to life, without any awkwardly CGI-ed creatures or magic. This alone should be enough to convince Netflix to keep churning out new animated content to add to their ever-expanding Witcher franchise.

**For more Nightmare of the Wolf content, be sure to check out the latest articles at our sister blog The Path. We also have a podcast episode discussing the film, scheduled for release this Friday, September 3rd.**