*SPOILERS FOR CASTLEVANIA SEASON 3 AND 4 AHEAD*

Okay, I’ll admit it. Part of the reason why Castlevania’s third and fourth seasons were so entertaining for me was watching Lenore seduce and trick Hector, a human Forgemaster, into giving up his free will to become a slave for the four vampire queens of Styria. Watching her slowly gain Hector’s trust, and then his attraction, all while keeping him wrapped around her little finger with so much ease, was fascinating. And all the while, I couldn’t help but think, “… wow. Sexy vampire mommy can get it.”

I’m not alone in this sentiment:

There’s one million views on the clip above (and now I am one of them).

Simps. Simps everywhere. (And I am one of them).

Joking aside, the contrast between Lenore’s allure and the actual, brutal reality of her character got me thinking. Is it okay to like a character like this, someone who quite literally enslaved a human being without remorse? And on a broader note, how do we resolve our attraction to the “bad boys and girls” of fiction, characters who we identify to be problematic but are still attached to for whatever reason? These are characters like Christian Grey from Fifty Shades of Grey, who is undeniably an inaccurate and unhealthy portrayal of BDSM kink culture. Yet, the original 2011 novel has sold 15.2 million copies since then, so it’s clear that there is no shortage of Christian Grey fans out there.

I think it’s pretty easy to be dismissive of these questions – after all, it’s easy enough to argue that we can be mature audience members that are able to separate fiction from reality, and that we should be able to engage with art and media in the way that we want to as long as it doesn’t hurt others.

However, I do think that some level of introspection and critical thinking can be helpful in making sure that the way we express appreciation for art and/or media (or on the creators’ side, express a narrative in art and/or media) doesn’t perpetuate an idea that we don’t mean. Saying that something is or framing something as “sexy”, “cool”, or “badass” is ambiguous. It can be easy to know for ourselves, individually, what we mean, but in translating that idea to something publicly consumable, that idea can be twisted. Such ideas, given the power of public amplification, can blur the line between fiction and reality in a way that can be dangerous. A problematic fiction can influence culture, which can in turn influence individual behavior.

The Domestic Violence Services Network (DVSN) has an article entitled, “The Romanticizing of Domestic Violence in Literature”, that makes this clear. Citing examples of novels aimed at or read primarily by young adults that famously depict abusive relationships, such as the Twilight franchise, DVSN makes a strong case for how public perception of these novels results in warped real-life expectations for romantic relationships. DVSN writes: “The problem is not the books. The problem is how they are presented. The problem is how they are perceived. The problem is that too many readers are romanticizing them and are being encouraged to do so.” My takeaway from this is that the ideas aren’t inherently bad – writing about a complicated relationship between a human and a vampire isn’t bad, and Stephanie Meyer may not have had bad intentions when writing her novels. However, we can and should be careful about how we frame these ideas as creators and as consumers of art and media. In short, we should call it as it is: Twilight and similar content that describe abusive relationships shouldn’t be marketed as romance, because this shouldn’t be how romance is normalized.

Caroline Borha, writing for the Maxine Platzer Lynn Women’s Center at University of Virginia’s Iris magazine, affirms the destructive influence of romanticized problematic literature in her own life. In her article, “Dear TV Writers, Please Stop Romanticizing Abusive Relationships”, Borha writes tellingly about Gossip Girl and Vampire Diaries: “…why do so many want this kind of relationship? Why do we idolize these abusive relationships? It all comes down to the fantasy of being made to feel special. Abusers are fantastic at making their victims feel like they are the best thing in this world, the only one who can change them, the exception to the rule… The narrative that girls want bad boys, and nice guys finish last is not helpful to anyone. Abusive relationships are not healthy and need to stop being perpetuated and romanticized by the media.” I like that here, Borha both acknowledges that the portrayal of relationships in these shows is abusive and empathizes with those who do enjoy watching these relationships.

These relationships are indeed abusive, but there’s a tantalizing fantasy here that keeps viewers engaged. What’s important is defining it as what it is – abusive – while understanding that what’s “sexy” about the relationship isn’t the abuse, but the fantasy of being made to feel special. Simply put, “it’s sexy” doesn’t cut it. We need to understand, at least for ourselves, what is sexy. This is the type of engaged viewership which I think can help prevent twisting fiction into reality, and developing such a mindset through critical thinking is why I think my original question of whether it’s okay to like problematic characters such as Lenore is worth examining.

Here’s my obligatory disclaimer: what I’m about to write is my opinion that I’ve formed based on personal introspection and a baseline understanding of romanticization in media and literature gathered from my online research. This should by no means be considered the endpoint of this discussion or as a definitive viewpoint. Instead, I’d rather people take this as an opportunity to talk about this more.

With that out of the way, here’s what I made: 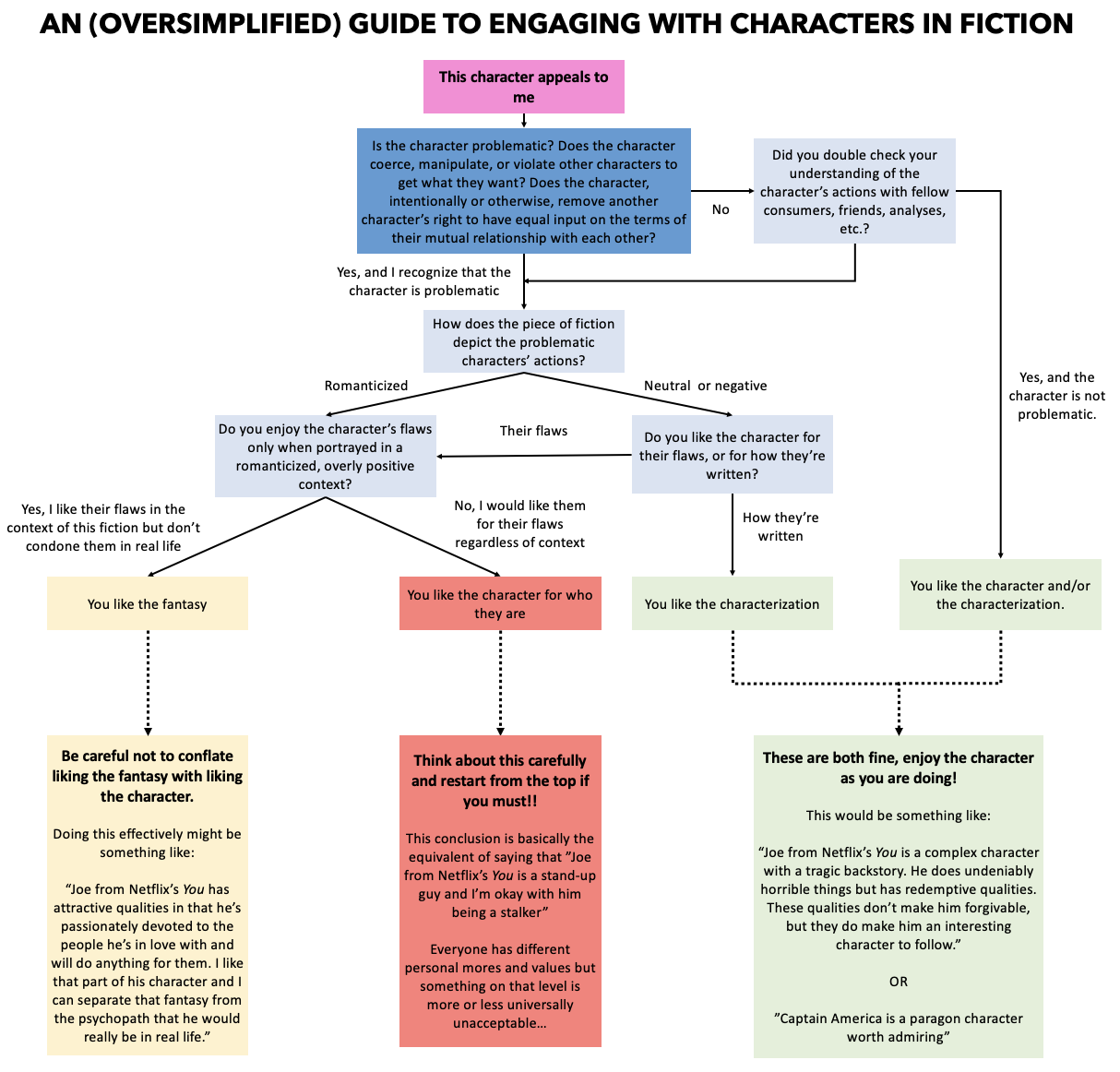 Okay! Signing off for now, hope you enjoy it!!

Just kidding. I realize that the flowchart presented above is a wall of text, annoying to look at, an amateur show of graphic design ability, etc – give me a break, I made it in PowerPoint and it took much longer than I’d like to admit. But yes, it warrants some explanation. Because we started off with Lenore, she’ll be our case study as I walk through the flowchart, but I tried to make the flowchart generalizable to any problematic character, regardless of how exactly they are problematic.

We start off at the top: “This character appeals to me”. I used “appeal” instead of “like” because “like” has a connotation of approval, which is a blanket statement that’s not very useful for more complex characters. This will make more sense down the road.

Traveling down, we hit the dark blue question block. Boiling down the question reduces it to, “Is the character problematic?” In Lenore’s case, this is a resounding YES. There’s no room for additional analysis here, she’s unequivocally problematic because she forcibly enslaves Hector for her personal desires, stripping him of his right to free will as a human being. You don’t need me to tell you that this is bad. In the case that a character is “not problematic”, either we are missing something about the character and they are worth re-assessing (in which case we loop back to this dark blue question block after re-assessing), or they are sparkly clean and an easily likeable and admirable character that doesn’t really require this analysis. If they are truly this type of character, the resultant outcome is: You like the character and/or characterization.

In the case that the character’s actions aren’t romanticized, and the art or media is objective or even negative in its portrayal of said character’s problematic actions, our task is easier because we can generally take the character at face value without additional scrutiny. From here, we can ask ourselves if we appreciate how the art or media has characterized the character, or if it’s a particular set of flaws that we’ve fixated on. Castlevania’s Lenore is represented in this branch of the flowchart. The show is brutally honest about Hector’s plight under Lenore, and although it shows us just how seductive Lenore can be, it pulls the rug out from under us by subsequently showing us Hector’s despair and his disgust at having been tricked. He doesn’t like his situation, and the show is, for the most part, honest to us about that. However, the show also illustrates Lenore to be a victim of her own inhumanness, and not altogether cruel. The other vampire sisters talk of her as the most compassionate of the group, and the show implies that even though Lenore does think of Hector as a pet rather than an equal, she does “care” for him as a pet’s owner would – he has his every need taken care of. It’s an interesting take on the worldview of a vampire character that doesn’t seem to be commonly explored, and that characterization can make her appealing to viewers. The resultant outcome here is: you like the characterization.

I’ll be honest here. Lenore’s a complex character, but her dominatrix-like seduction was what got me hooked on her, not the nuances of her characterization as a vampire. In this case, I have to shunt myself to the other branch of the flowchart, because even though the creators haven’t put rose-colored glasses on me, I’ve clearly elected to do that to myself. The same questions as before apply here: do I like the fantasy, or do I like the character? As an upstanding citizen, I … really don’t like slavery, so I will admit that the fantasy of having a beautiful, vampire vixen tempt me is the driving force behind my attraction to Lenore. I don’t like Lenore the character, but I like the idea of Lenore.

That was a lot, but it makes sense, right? To make it even easier, let’s summarize the four outcomes and what leads to them:

This is all a very long-winded analysis that tries to more specifically understand what it means to “like” a character, and for what it’s worth, these distinctions are admittedly mostly semantic in nature. However, I do think these distinctions are worth thinking about if they help you better understand your relationship with a particular character. For a more general sense of the thought process behind similar analyses of characters, I think a good starting place is this article by Kate Gardner, originally published on The Mary Sue: “It’s OK to Have a Problematic Fave Character, but Don’t Expect Everyone to Agree”. I’m in agreement with the main points here. Yes, by all means, love the characters that you want to, but do critically think about what it is that you enjoy about them – do you love that they’re written in a way that’s relatable to a certain part of your life? Or do you love that they inspire a guilty pleasure fantasy in you that you didn’t know you had? Or do you actually like them as you would like someone real that you’d be okay with having in your life? These are all different things but can all be conflated under the umbrella of “my favorite character” or “I love  this character”, which is why I think it might be worth taking a deeper dive into our own understanding of our passion for these characters. Reaching this deeper understanding might not only be impactful for our greater fulfillment from consuming art and media, but also for the way we as individuals collectively perceive ideas from art and media. 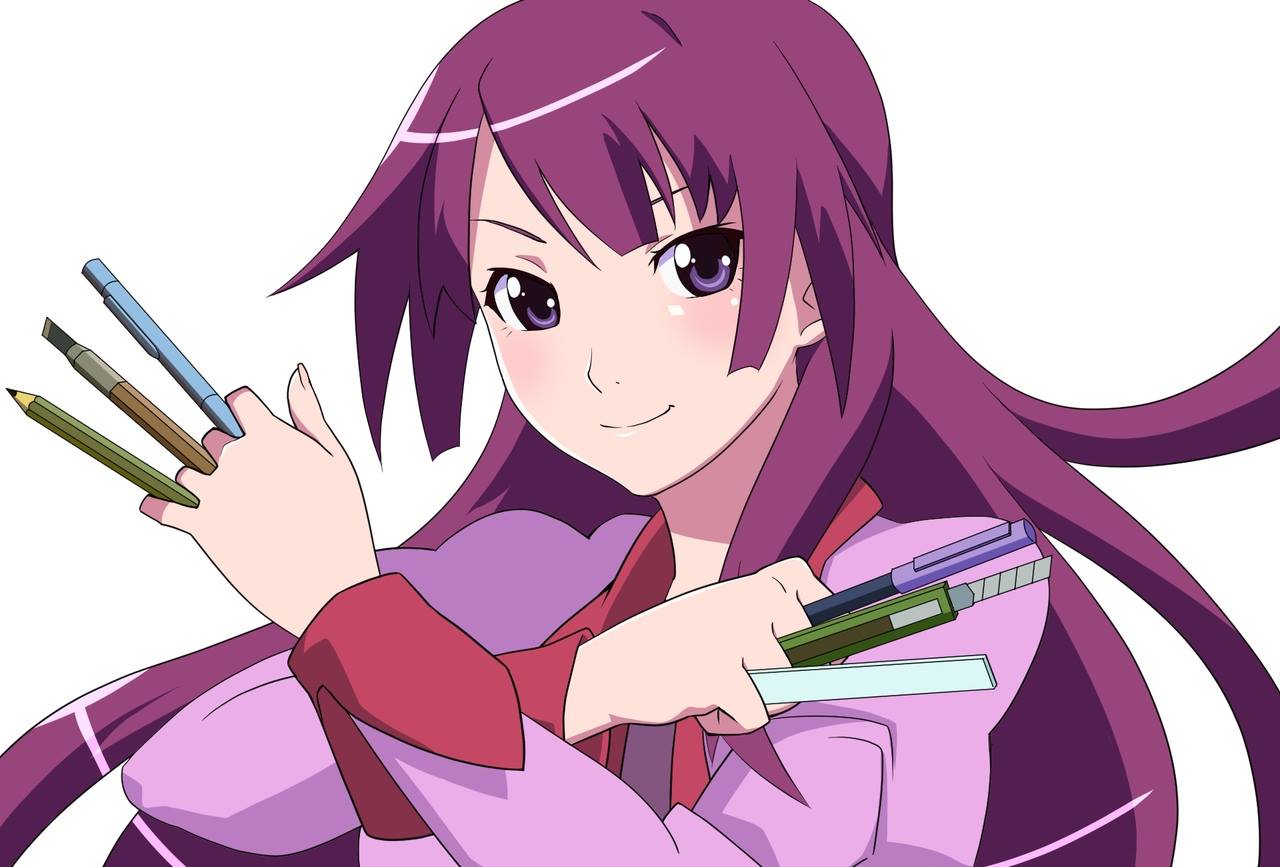