Two weeks ago, I published an analysis of the newly released cast list for the upcoming live action adaptation of the beloved Last Airbender cartoon. The planned Netflix series has been surrounded by a lot of buzz and fan theories since the initial announcement first dropped in 2018, and longtime devotees of the show (myself included) have been eagerly anticipating any kind of production news or updates. Since a release date seems impossibly far away for the time being, for now all we can do is debate what the live action series might look like. Will it be a guaranteed flop, despite Netflix’s best efforts? Or will it surprise everyone and achieve international success? Let’s discuss.

You can’t say “live action Last Airbender” without the wretched, awful, cursed film of director M. Night Shyamalan’s creation coming to mind. It’s simply inevitable, and even though eleven years have passed since its release, the movie still serves as a painful reminder of how one of the most iconic and beloved children’s cartoons of all time was horribly mangled.

Okay, maybe I’m being a bit dramatic—but in my defense, any ATLA fan who has seen Shyamalan’s film would probably agree with me. When it comes to the many downfalls of the live action film, where do I even begin? I wrote extensively about the whitewashing of the main characters in my previous article, a casting decision which served as an extremely disrespectful and inaccurate variation from the diversity shown in the original animated series. The bad writing (a common feature of Shyamalan’s lower-quality films) combined with the mediocre child actors was also painful to watch, so painful that even a young Dev Patel’s acting talent couldn’t save it.

Whitewashed casting and bad acting aside, there are three main points that I would like to focus on in this article: bending, CGI creatures, and cartoon humour. All three of these factors completely failed to deliver in Shyamalan’s film, so in this article I would like to discuss their importance to the animated show, whether or not it’s possible to make these components look good in a live action adaptation, and if I think Netflix can accomplish the near-impossible task of properly adapting ATLA into live action.

Let’s start with what is arguably the most important characteristic of the entire show itself: bending. Bending is defined on the ATLA Wikipedia page as “the ability to telekinetically manipulate and control the element[s]…using gestures based on Chinese martial arts.” When you try to put it into words, the concept of bending is a bit difficult to explain. In the ATLA universe, the power of bending applies to four main elements of nature: water, earth, fire, and air. While these elements are commonly used themes in fantasy and magic, bending is much more complicated than just waving a wand or chanting some magical words.

Bending can’t be done by just anyone; the people of the ATLA world are divided into benders and non-benders (a conflict that lies at the forefront of the plot of Season 1 of Legend of Korra, ATLA’s sequel series). The element that you can bend depends on what nation you or your parents are from, and each bender is limited to one element (although sub-elements like blood-bending, plant-bending, and lava-bending exist). The Avatar is special because they have the ability to bend all four elements, thus making them an influential figure in maintaining global peace and harmony.

From this behind the scenes video featuring Sifu Kisu, the martial arts consultant for the animated ATLA series, you can see the incredible work and attention to detail that went into crafting the choreography and design for bending in the show. Sifu Kisu’s expertise served as the perfect blueprint for all of the bending in the series, from simple training montages to incredible fights. With the power of animation, the showrunners were able to add in the elements to the choreography, creating a perfect blend of martial arts and elements that fit perfectly into the worldbuilding of ATLA.

Of course, all of this went to shit in Shyamalan’s adaptation. The martial arts choreography is terrible and poorly executed, to say the least. As Honest Trailers puts it, the titular Avatar, Aang, looks more like he’s “doing his green belt karate demonstration” than any actual fighting. Additionally, how could I forget that one scene where a large group of earth benders do a painfully long bending routine, only to slowly float one teeny little rock toward some Fire Nation soldiers? You know the one… many fans have argued that it’s the #1 worst scene in the entire film.

So, for the Netflix adaptation, let’s pretend for a moment that they use Sifu Kisu’s original choreography. They teach the actors the appropriately corresponding martial arts for each element, and they all master the movements and choreography. Here’s the dilemma: when they add in the four elements using CGI, will it still look good? This special effect will definitely be one of the biggest challenges for the showrunners working on the Netflix live action.

The magical thing about animation is that you can make pretty much anything look real or believable, especially when you’ve done a good job worldbuilding and establishing a universe with its own rules of magic and fantasy. The Last Airbender does just that; right from the get-go, in the opening narration by Katara, we are introduced to the concept of bending and the history behind the ATLA universe. It is easy for us to obtain a suspension of disbelief because we are being introduced to a world that is entirely different from our own, a feat that is much more easily achieved through animation.

Here’s the problem with transforming animated content into live action. “Live action” implies that the realistic content shown on the screen takes place in a world similar to ours, with people that look like us. Obviously, I don’t expect anyone who watches live action to truly believe that we coexist with the dragons from Game of Thrones or the magical elves from Lord of the Rings. However, when you try to change animated content into a more realistic, relatable thing that looks like it could be in our plane of existence, that’s when things get dicey.

Unfortunately, the ability to bend the elements does not exist in reality. So, when the magical qualities of bending are introduced to us and our reality through CGI, it’s hard to look at it and accept it as “real.” Even though the bending in Shyamalan’s film wasn’t good to begin with, there’s just something about CGI water bubbles and fake fire that doesn’t look convincing in the slightest. I’ve said it a thousand times and I’ll say it again: animation is the superior format, and animated content should stay that way.

This argument remains the same for the various creatures that exist in the ATLA world. The most important animal characters in the ATLA series are Aang’s furry sidekicks, the flying bison Appa and the winged lemur Momo. Both animals are cute, have their own personalities, and offer a lot in terms of character and plot development. Given the fact that they are too important as characters to be omitted from the live action series, the CGI animators need to figure out a way to animate these two creatures without making them look weird or horrifying. Again, Shyamalan’s film failed in this aspect as well—CGI Appa looks more like a frightening mix between the beasts of Where the Wild Things Are and Falkor from The Neverending Story than an adorable, loveable steed. 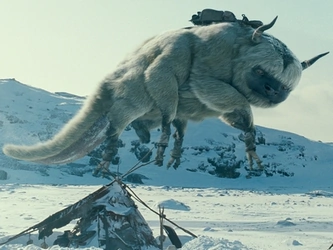 In addition to Appa and Momo, there are several other weird and wonderful creatures that make an appearance throughout the animated ATLA series. From turtle ducks and platypus bears to elephant koi and buzzard wasps, the list of fun and creative ATLA fauna goes on and on. Much like with bending, bringing these strange creatures to life through CGI will certainly be a Herculean task. The key component with these creatures is that a lot of them are meant to look cute and lovable in the original series, which will prove to be difficult in a CGI format, since you typically can’t give animals human-like emotions and facial expressions without them looking really wack.

And finally, we’ve reached my last discussion point: will a live action series be able to capture the same humor and depth of emotion that we grew to love while watching ATLA as kids? Maybe, maybe not. This ultimately depends on how well the actors can pull off this niche type of childish humor, without making it sound too stupid or too dumbed-down. After all, while the live action series will probably be marketed toward younger audiences, Netflix should also count on tens of thousands of Last Airbender fans, who watched the original series as kids and grew up with it, to tune in and watch the new series as well. Especially after Netflix started streaming both ATLA and Legend of Korra, it seems everyone’s original childhood obsession with the two Nickelodeon series has rekindled.

While I don’t doubt that the chosen actors thus far are talented, I worry that capturing the same humor and magic of the original series will be difficult. Avatar is known for its characters’ many goofy/silly facial expressions, anime-like dramatic reactions, and stand-alone comedic relief characters like the Cabbage Man. Everyone loves Sokka’s cactus juice-induced high in the desert episode; will actor Ian Ousley be able to capture that same humor, without coming off sounding ridiculous?

These are all delicate questions and issues that need to be addressed going forward, especially when script writing and production starts. Given the original ATLA’s anime-inspired style and mannerisms, it was the perfect way to combine childhood cartoon goofiness with much more serious themes like genocide, war, and trauma. To me, in addition to the pressing CGI issue, it seems nearly impossible to capture the same magic and fun that we grew to love in the animated series in a live action adaptation.

To conclude, unfortunately I don’t have super high hopes for Netflix, at the moment. Although I don’t doubt that the production team and actors will try their absolute best to give us the best possible live action adaptation that modern CGI has to offer, I am a firm believer that trying to capture fantasy elements like bending and hybrid creatures will never look good in a live action format, no matter what. Netflix’s live action adaptation will surely be much better than Shyamalan’s film, but it will never be perfect, especially in the eyes of dedicated fans who have studied and watched the original ATLA series countless times.

At the very least, financially, the live action series will probably be successful. Everyone will be eager to watch the series when it finally drops on Netflix, leading to possibly millions of views around the world, and the potential to develop a second season. Every ATLA fan out there is going to want to see for themselves how good of a job Netflix did adapting the cartoon. And who knows? Maybe when the first stills from the series get released, we’ll be surprised to find that CGI Appa doesn’t look so bad after all. 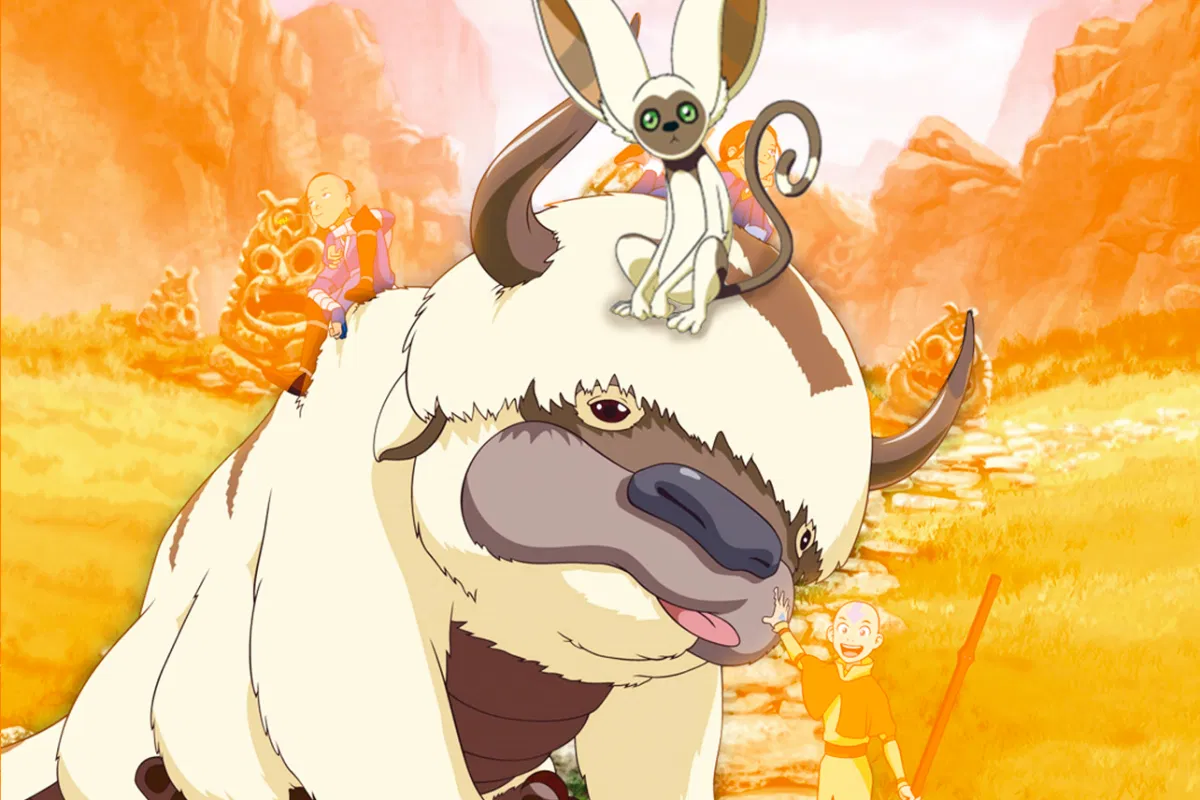